Tweet Victoria Justice is set to have a busy Summer! At the moment she’s filming her hit Nickelodeon show ‘Victorious’, but in less than a month she is set to start her first national headlining tour!

Victoria spilled some tour deets recently. She will be performing covers, some songs from ‘Victorious’ and ‘Spectacular’, plus new songs from her upcoming debut album! Our girl Victoria has a lot on her plate at the moment, she just finished filming her upcoming film ‘Fun Size’ and with an album set to be released soon, we don’t think she is going to be slowing down anytime soon! Not that we’re complaining!

The awesome Max Schneider, the star of ‘How To Rock’ and the upcoming Nickelodeon TV movie ‘Rags’ is set to open for her! Max’s original songs have been featured on ‘How To Rock’ and ‘Shake It Up’. Victorious and Max are going to be amazing on tour, and who knows, maybe they will even perform a duet together?!

Are you going to see Victoria on tour? We’re buying our tickets ASAP, there’s no way we’re missing out on this one! Click here to get yours! 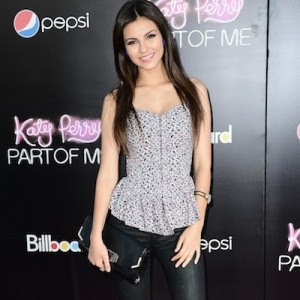